The Dame was thrilled to be invited as guest of honour at the very first Earl's Court Fringe Film Night organised by The Earl's Court Area Action Group on Wednesday, 9th November.
She will be wearing the sparkly 'family heirloom' Boucheron tiara she liberated from the family of hubby No. 4, the Armenian arms dealer. 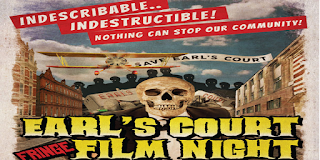 ECAAG is producing its own standalone fringe event that will coincide with the second Earl's Court Film Festival whose chief sponsor is Capital & Counties Properties Plc (Capco).

In the interest of balance, ECAAG’s aim is to stage an alternative event that is entirely free of corporate spin and is not driven by Capco’s cynical commercial interests, dressed up as caring for the very community its development is set to wreck.

The core message is that Earl’s Court is, against the will of many residents, being hijacked by Capco and is in danger of being defined within the narrow self-interests of the developer's Earls Court Masterplan.

Capco claim they are creating "a new district for London." What is happening there, however, goes beyond urban regeneration.  Capco has destroyed the iconic Earls Court Exhibition Centre and with it, an area’s cultural heritage and socio-economic heart. Capco also seeks to demolish 760 homes on the West Kensington and Gibbs Green estates, destroying well-established close-knit communities with no gain to residents. Capco are in fact creating a "property bank” of ultra-prime market flats for the benefit of largely overseas investors. Scandalously, not one single new social rented or affordable rent home is proposed on the site of the former Exhibition Centre.

Against a backdrop of ‘hard Brexit’ and the compelling need to increase exports it is inconceivable that any government should surrender 16% of the UK’s total exhibition space to developers. Not only was Earls Court Exhibition Centre one of London’s two major shop windows for the world, it generated  prosperity at a local level (many businesses have since shut).  It also brought fun, fashion, music and culture to Londoners and visitors from the UK and overseas.

Ironically, Capco describes its PR-driven headline sponsorship of the second Earls Court Film Festival thus:
“Capco recognises that creativity is a key ingredient to the development of a place’s culture and enduring local identity. Our aim is to help bring people together and communities to life through a committed investment in creativity and the arts, and Capco’s support of the Earl’s Court Film Festival underlines this commitment in Earl’s Court.” ¹

ECAAG’s fringe film night demonstrates the staunch resistance and resilience within the local
community to stand up to Capco. ECAAG’s event keeps the spirit of rebellious creativity burning bright within Earl's Court.
When and where
Starts at 7pm on Wednesday, 9th November at The Bolton pub, 326 Earls Court Rd, London SW5 9BQ. Nearest tube is Earl's Court