According to local people these EU citizens are wreaking terror in the neighbourhood with a wave of violent muggings and aggressive begging.
Fortunately for Judge Walker he lives in the leafy suburbs so can condemn local residents and business to conditions he would never tolerate himself.....
Posted by the Dame in the HornetsNest 20 comments:

THE DAME UPDATED ON GOVERNMENT STRATEGY

Young Dom Cummings suggested to the Dame there was hope the Supreme Court finds the Prime Minister acted illegally in proroguing  Parliament.
According to him, ordinary people loathed the judiciary with such vehemence that an attack on Johnson by senior judges would send his popularity soaring. 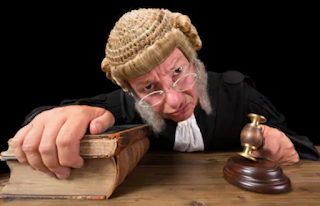 Inflammatory stuff but he could have a point....
Posted by the Dame in the HornetsNest 2 comments:

Wily chairman of the Kensington Association, Andrew Foster, is working hard to palm off members with
the idea that the treacherous and bullying Palmer has mended his ways and will no longer work for the opposition Brexit Party.
In fact, Palmer has been telling Foster that he has such a loyal following in his Remainer ward that they would all follow him to the Brexit Party!
The deluded Palmer thinks he is untouchable!
What madness is this.......

It will be an extraordinary state of affairs if Palmer is allowed to continue to take the Tory whip.
Tony Blair's sidekick, Campbell was kicked out of the Labour Party for merely saying he would vote Lib Dem.
Similarly, the old poseur Heseltine got canned for the same.

Palmer, on the other hand, drove up to the East Midlands to spend days canvassing for Brexit Party MEP candidates......


Posted by the Dame in the HornetsNest 10 comments:

Nicola Horlick is a real blowhard whose main PR strapline is that she ran a family and worked in the City.
So what? Thousands do.

Anyway, according to the Dame's old friend, Guido Fawkes, the Lib Dems think that this old relic from the '80's is going to frighten smoothie Greg Hands.
The Lib Dem chairman thinks Chelsea and Fulham voters will be attracted by some old City hack: it's very doubtful.
Horlick is all mouth and no trousers

The astonishing thing is that Horlick gets so much coverage when her struggling peer to peer lender, Money & Co seems to have reduced employees from twelve to one.
Nicola hit a very bad patch when her asset management company, Bramdean, invested in Madoff.
Before he ran off with everybody's money she was quoted as saying he was 'good at calling the markets'! You can read more about the dimwit HERE
Obviously, she had a judgment bypass

Is the Liberal Democrat choice to fight the Kensington seat, Rabina Khan, a protegee and friend of the disgraced Tower Hamlets Mayor, Luftur Rahman?
You will need to ask Miss Khan.....but she was part of his party and then - after he was kicked out of office and barred from standing for election offences - she was his favoured candidate in the ensuing by-election.
Rahman, an electoral fraudster, has a colourful history in East London.
Reading about him HERE he seems to be the sort of politician more suited to Bostonian politics.
He also seems to have very dodgy friends in ' Extreme Islamist' politics so The Dame advises potential Lib Dem voters to forensically question Khan about what she thought of the morals and ethics of her one-time political colleague and possible mentor?
And don't even think of suing the Dame. Her last few thousand were wasted on her new facelift.

Khan also has powerful friends within the Lib Dem leadership.
In order to thwart the local association from making their own choice the national party fixed it so the clock would run out and their own people could be imposed on the association: hence the foisting of someone with no connection to Kensington on the local association. Evidently, the Liberal Democrat Party chairman has gone on the record as saying, "straight white men" would be unlikely to be selected!

IN SEARCH OF CLLR PALMER

Can someone help an old thing with poor vision?
The Dame is an avid follower of council debates using her rather elderly Amstrad.
She looked carefully around the council chamber hoping to espy Cllr Palmer checking his share portfolio but saw no sign of him. 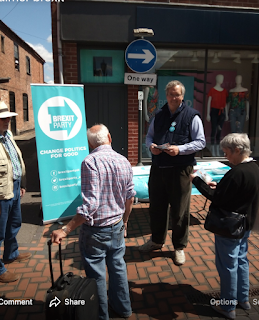 She hopes that he has not got into trouble over his East Midlands dalliance with the Brexit Party.
Tribal loyalty is a 'sine qua non' in the Tory Party and Cllr Palmer's excuses that he was fed up with Mrs. May will count for nothing.
If you are a member of the Conservative Party it's unwise to canvass for the opposition....and if you do expect to get canned.

Dear Dame,
When elected Cllr Campbell promised a new 'listening and hearing' era: she has not delivered on that promise.
You will be interested in this letter from the chairman of one influential RA chairman who claims the wishes of residents have been ignored in the interests of 'big business'.
Cllr Campbell has also presided over the extraordinary state of affairs whereby the Labour Group refuses to participate in Scrutiny Committee work.
This is not good news for residents.
I see that our Council is spending over half a million a year on public relations. No amount of money wasted on PR disguise the truth that old habits die very hard.

The Council has recently circulated a newsletter announcing that the Cadogan Estate's scheme to provide parking spaces outside its luxury shops in Sloane Street, rebranded by the Council as a "public realm improvement scheme", is to go ahead. Work will start on the southern section of the scheme, from Sloane Square to Cadogan Gate, later this year. The newsletter can be read here:
https://www.dropbox.com/s/veh1i0ubqvqi8km/Newsletter%20July%202019.pdf?dl=0

This decision has been made notwithstanding strong criticism of the scheme from MISARA, the Brompton Association, the Chelsea Society and other residents' groups.

We have been badly let down by our local ward councillors, who have chosen to support the scheme, based on the results of the Council's consultations which purport to show "a very favourable response" from those consulted, particularly from local residents. We know that your own views are very different: we have explained many times that the Council's consultations were so manipulative and one sided as to provide no basis for decision making, but our explanations have simply been ignored.

In response to the last consultation, individuals and organisations wrote letters and emails to the Council showing opposition to the scheme by 19-7. We have repeatedly asked the Council to publish the appendix containing these letters on its website, but the Council continues to refuse to do so.

In recent months our priority has been to try and persuade the Council to remove the unsightly "planters" from the scheme. Sophie Andreae, the chairman of the Brompton Association, and Stephen Baxter, representing MISARA, have argued the case for this at several meetings with Cadogan and Council officials. On 15 July 2019 they sent an email to Cllr Thalassites, Lead Member for Planning and Transport, pleading for their removal, which can be read here:
https://www.dropbox.com/s/63en9x6mtxk03kv/Email%20to%20RBK%26C%20re%20Sloane%20Street%2015.7.19.docx?dl=0

At one of these meetings the Council furnished pictures of the street resurfaced not in York stone but in porphyry, the second most expensive material after marble. This shows what can happen when Council officials are given the freedom to spend a large amount (£18 million!) of someone else's money.

Readers of Country Life will have noted a recent article by its former editor Clive Aslet, a patron of Save Sloane Square, referring to a moment in the 1950s "when the Cadogan Estate had a rush of blood to the head and proposed replacing most of Sloane Street and Sloane Square with a mini Swindon of concrete towers and walkways reached by escalators". Evidently its destructive tendencies have history behind it.

On 24 April 2019 Dr James Thompson, the chairman of the Chelsea Society, wrote a trenchant letter of criticism to the Leader of the Council calling on her to abandon the proposed narrowing of the carriageway in the northern section of the street:
http://chelseasociety.org.uk/sloane-street/

"Elizabeth, we recall that you made a number of speeches, before and during the local elections, in which you acknowledged that the culture of the Council needed to change, and promised that the Council would “take greater care to listen to residents’ views” and become “a truly listening borough” and that “we will be judged by what we do and not what we say”.

In the matter of Sloane Street however, the Council seems to have reverted to its pre-election behaviour. It organises a consultation designed to show support for a particular outcome, rather than to discover the residents’ views; it ignores those views when they are expressed; it pretends that support exists when it doesn’t; and it fails to engage with organisations which genuinely represent local people.  It also seems to have been unduly influenced by a conditional offer of third-party funding.  These are all matters which I am sure will be debated at the Society’s next AGM.

The Council is hosting two meetings at Cadogan Hall at which visitors will be able to ask questions about the construction programme and the detailed works. These will be on Thursday 18 July from 15.30-19.30 and Saturday 20 July from 10.00-14.00.

We regret that our efforts to stop this unwelcome scheme have been so unavailing. We will continue to try and influence the details, but we are not optimistic.

Those thinking the Dame an embittered old hag should be ashamed of themselves.
On the contrary, she has a compassionate side.
Many a 'politician' has made their way to her modest art deco 'duplex' home for tea and 'fancies' and a shoulder to blub on.

The Dame and Cllr Palmer have had their differences but nice Mr. Farage called her up and suggested that she invite Cllr. Palmer for a cuddle and a cuppa though the Dame wonders what Cllr Palmer's 'crise' has to do with him...

SHORTAGE OF POLICE OFFICERS? DON'T YOU BELIEVE IT!

After many months luxuriating in Biarritz, the Dame returned home to an astonishing sight.
How often we are told that the police are undermanned and underfunded so perhaps our Borough Commander can tell the Dame why seven police officers were seen entering a block of flats in Hans Place investigating what was probably a break-in.....
Seven police officers all looking very relaxed....
Most look as if they should be made to occasionally get out of their vehicles and pound the streets for some exercise. 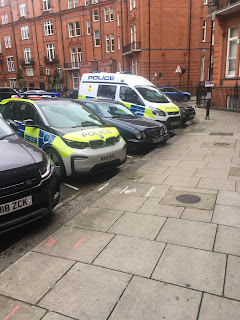 Posted by the Dame in the HornetsNest 6 comments: