This is Professor Andrew Oswald from that hotbed of sociological drivel, Warwick 'Uni'.
The Prof wants to keep over the '50s at home for an extended period on the basis that Covid 19 is more likely to polish them off. He wrote, "police officers would have to be given the power to fine those caught breaking the age rule to ensure it was followed"
The Prof is so indolent in his thinking he cannot come up with a solution recognising each age group contains high-risk elements: those with underlying health issues...the unfit or, more likely, the obese.
The Dame wrote to the Prof telling him to buck his ideas up and think constructively.
Instead of a blanket lockdown for over 50's he should have recommended over  50's ask their GP to provide a certificate that they suffered no underlying health issues nor were obese.
This could be provided for a nominal sum
These nonproductive university departments need to be closed down and the staff sent to farms to pick fruit and veg.

The Dame, like all Londoners, loves Old Father Thames so when she hears that Colliers is in trouble she is delighted to step in and hope readers will join with her and spread the message.
This business is a vital part of London's tourist industry and it's staggering that the Mayor of London has not stepped in to help 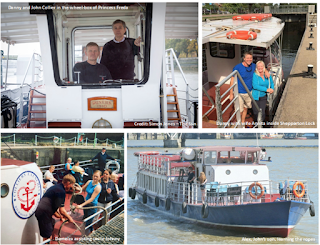 Our family business is under threat from Covid-19. Lockdown hit even before our season started.
We have set up a crowdfunding page in an attempt to get some support to keep us afloat as we fall between all government safety nets.
We have already made some traction, but I fear this might be futile if we can’t reach people.
If your readers can help in any way I hope you can click on this LINK and spread the message.

Posted by the Dame in the HornetsNest 11 comments:

Our parks are full of police telling people not to sit together on benches.
Contrast the difference with my small block of flats.

A building company is breaking every government guideline by starting a major programme of non-essential building works on a neighbour's flat.
In the process, it is totally ignoring social distancing rules by allowing workers to come in and out of the building.
So far, one resident has contracted the virus but thankfully recovered.
As one of the three residents, I am fearful of the implications for my own health and safety.
I am a seventy-seven year old awaiting the go-ahead for a cancer operation and the fitting of a pacemaker.

I have asked the Leader of the Council, her Environmental Health team, and my elected representatives to intervene but to no avail (though I have to praise Cllr Sof McVeigh for doing all she can to help).

It is quite wrong that the statutory bodies have failed to intervene thus leaving us owners to pay exorbitant legal fees to serve a Cease and Desist Notice to protect ourselves.

I hope you, dear Dame, and readers agree that the Council is in serious dereliction of its duty to residents by not intervening and halting this blatant breach of the rules.

THE BOROUGH'S BEST CYCLE MECHANIC PLUGGED BY THE DAME

Dave is just a phone call away 07576 282102 and provides an excellent, good value repair service.
There is nothing he cannot do when it comes to cycles and, best of all, he comes to you.


With the sun shining and roads clear the Dame will be getting Dave to check over her trusty Raleigh.

WE NEED TO TALK ABOUT NHS MANAGEMENT 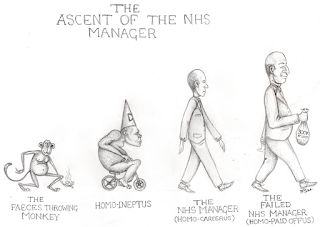 How can we reward our amazing NHS frontline staff....the doctors, nurses, technicians, porters and the key staff who have worked so tirelessly through the Covid crisis?

The Dame was once a member of a Hospital Trust.
All she ever heard from doctors and frontline staff were complaints about the sheer bungling ineptitude of most NHS managers.

So the best present we can give the frontline staff is to root out these incompetent and overpaid managers and send them packing: it won't be easy but it can be done and must be done.

Posted by the Dame in the HornetsNest 18 comments:

A reader-well known in the creative sector-points out a glaring anomaly in government support for the creative industries.
Not massive multinational concerns but the hundreds of highly skilled and irreplaceable craftsmen London is noted for.
As an example, the jewelry industry relies upon a raft of stone setters, polishers and diamond mounters: yet none of these vital workers are being given Business Rate Covid Relief.
Extending the example to other sectors....independent gunmakers, gilders, furniture restorers, painters, stone masons and weavers all are faced with having to pay business busting business rates despite turnover dropping to all-time lows.

Another is Kering, a $61 billion French brand company owned by the mega rich French Pinault family.

It looks like it's 'small people' may not matter to this government.
That's madness....they are the backbone of London's world-renowned creative  industries.

Posted by the Dame in the HornetsNest 9 comments:

SO MUCH EASIER THAN TACKLING REAL CRIME

Before the lockdown patrolling police were as rare as hens' teeth.
If you tried to report a low/medium level crime you were told there were no resources.
In fact, the Dame cannot recall the last time she saw police patrolling our streets.

Now the police are everywhere rushing around telling people they cannot sit on park benches or play with their children.
So what's happened?

Can it be the result of Boris's boast that he would put thousands more police on the streets? Doubtful....

The other day a resident reported that a police 'raid'  on Cadogan Square gardens was a great success.
A posse of at least 6 police rushed around the garden kicking people out.
Geriatric residents sitting harmlessly on benches were ejected as were parents playing with their children.
This sort of behavior is souring relations between the police and residents.
In this instance, all that was required was one policeman/woman....(not a vanload) to courteously advise people to observe the guidelines.

I live on what is supposed to be a quiet residential street, but it appears to have been taken over drug dealers and users.

This also comes with a large helping of noise, mess, aggressive begging,  criminal damage, and threatening behavior.
Last night these antisocial individuals made constant noise having some sort of random street gathering and myself and many others in my street were kept awake by this all night.

But where are the Police, you may ask?
They appear to be putting their limited resources into patrolling the parks and fining people for sunbathing instead.

Meanwhile,  local residents right around the corner from a park, are expected to put up with criminals and suffer from their antisocial behavior night after night.

There is no point in telling us to call 111 because when you do and report the matter, you are told that "Police officers will be there shortly"  and nobody turns up!

There are also currently a lot of bicycle thefts going on in North Kensington and Shepherds Bush.
It is usually drug addicts who are committing these crimes to fund their habits, but this is also being ignored by the Police.

It appears that sunbathers and families having picnics in the park, as well as going on social media now appear to be the top priorities for our Police
Whatever happened to catching criminals and keeping our streets safe?

We're told to "stay safe" but when your home does not feel safe, what then?
We really need the help of the Police but they do not appear to be concerned with crime anymore.
I suppose if Police officers are in the parks in the day, then at least residents know where to find them.

It's  all very far from reassuring.

Pre the virus we were told that the police lacked resources to tackle crime: they seem to have lots of resources to harass harmless sunbathers.

North Kensington resident
Posted by the Dame in the HornetsNest 3 comments:

Whilst our Prime Minister fights to get well he has been inundated with messages of support from those of all political persuasions.
Those from Sadiq Khan and Keir Starmer were especially heartfelt and leaders of global democracies have also shown their compassion.
The Dame has sought high and low for messages of support from the leaders of those two mega non-democracies-China and Russia but not a peep.
How sad.....

Posted by the Dame in the HornetsNest 7 comments: