NOT ANOTHER DAMNED LAWYER/LOBBYIST FOR BIG BUSINESS

Up against Greg Hands and the Labour ex-felon, Uberoi, is a breathless champion for multinational business, Louise Rowntree.
Miss Rowntree boasts of advising all sorts of international big wigs when she is not lounging around in bed drinking wine and watching American 'box sets'.

Well, Miss Rowntree, we are all getting a bit fed up with you lawyers infesting the Commons and we doubly dislike lawyers who turn their skills to lobbying for powerful multinationals.
If you really want to convince us all that you are 'the girly girl from next door' publish a full list of every client you have ever lobbied for...
Are you up for the challenge?
Posted by the Dame in the HornetsNest 42 comments:

THE UNPUNISHED TREACHERY OF COUNCILLOR PALMER

Cllr Palmer's decision to aid the Brexit Party in the EU elections is a slap in the face for Queens Gate's voters: most must have assumed they had elected a dyed in the wool Tory rather than a disloyal turncoat.
Conservative MEP candidates in the East Midlands must also be feeling embittered knowing from Private Eye that Palmer was an agent in their downfall!

When Alastair Campbell announced that he was voting Lib Dem retribution was swift so why is Cllr Palmer's odious behavior tolerated?
Time the local association and CCHQ manned up and kicked out this two-timing embarrassment.


Posted by the Dame in the HornetsNest 24 comments:

A TALE OF TWO STANDARDS

John McDonnell spent a large amount of his time this week attacking the career history of the newly-promoted Chancellor, Sajid Javid.
While some might take heart at the way Javid, as son of a Pakistani bus driver, worked his way up to become a banker and then the second most powerful politician in the country, for McDonnell it’s clear evidence that he should be clapped in irons.
In a press release on Monday, McDonnell thundered that Javid’s stint at Deutsche Bank and his alleged role in selling collateralised debt obligations (CDOs) which were behind the 2008 banking crisis, meant that he was unsuitable to be Chancellor, and the prime minister should launch an investigation into his past.
You might think it a little hypocritical of McDonnell to criticise Javid when it comes to past experience: after all, McDonnell’s early career mainly consisted of him swanning from trade union to trade union during the 1970s, as Britain was crippled by strikes.
But it seems that the Shadow Chancellor has a blindspot when it comes to banking impropriety in his own party too.
Last month, the Labour party announced that it had selected a host of new parliamentary candidates who would represent the party in the next general election.
One of which was Matthew Uberoi, who will stand in Chelsea and Fulham against Greg Hands.
Rather awkwardly though considering McDonnell’s current line of attack, Uberoi has actually been convicted of banking offences. In 2009, the wannabe MP was  jailed for three months for insider trading, after he passed on tips to his dentist father (who was also jailed) when he was doing work experience at a bank. According to the Telegraph, Uberoi used coded messages about Chinese food to pass the information on to his father, who made over £100,000 from illegal trades.
In a blog post in 2018 explaining why he was standing as a council candidate, Uberoi explained that he joined the Labour partly shortly after he was released from prison, not for ‘redemption’, but because he wanted ‘to change the world’.
We are glad of course that Uberoi has been rehabilitated. But if McDonnell thinks it so terrible that a former banker (who has never been found guilty of anything) is Chancellor, surely it can’t be right that a convicted insider trader has been selected to represent the good people of Chelsea and Fulham?
Posted by the Dame in the HornetsNest 24 comments:

Oh dear, some mischievous person has fed the story of Cllr Palmer's divided loyalties to Private Eye's Rotten Boroughs.
They even drag nice ex cllr Danny Moylan into the mix
Posted by the Dame in the HornetsNest 21 comments: 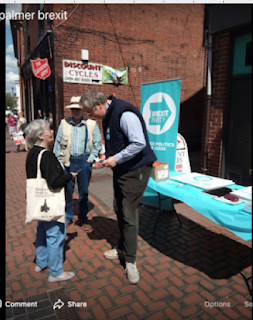 Controversial Conservative Councillor Matthew Palmer represents Queensgate Ward on RBK&C.
Only recently he was reprimanded by colleagues for insulting behaviour towards Grenfell survivors.
Even close colleagues are embarrassed by his eccentricities.

That embarrassment was further exacerbated after hearing Palmer had made a trip to the East Midlands during the European parliamentary elections.
Nothing wrong with that except he went to help canvass for the Brexit Party-much to the chagrin of the five Conservative candidates!
In fury, they have raised the matter with the Conservative Party chairman and the chairman of the Kensington, Chelsea and Fulham Conservative Association: canvassing for another political party are grounds for expulsion.

Local Conservative voters will be further surprised to know that Palmer was a senior member of the Selection Committee charged with selecting a Conservative candidate to fight the Brexit Party in the next General Election!