TfL AND ITS DODGY AND EXPENSIVE 'RESIDENTS' SURVEY 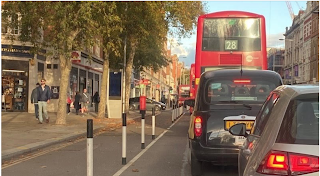 ICM was paid a great deal of London taxpayer's money to give TfL the answer it wanted.

When a public body organises a 'consultation' the questions will be 'fixed' to back up the results they want.

In this case, TfL wanted the reinstatement of the hated, pollution-creating, and unused cycle lanes.

Residents were vociferous in their hatred of cycle lanes so it was interesting to look at the guts of how ICM carried out questioning and the perfidious 'result' that 56% of residents wanted reinstatement.

A person questioned reported she was never told the survey related to the cycle lane.

She said, "The first question asked whether I would like to see cycling made safer for cyclists in London; the next, whether I thought putting a physical barrier between cyclists and traffic would make cycling safer!

She went on, "The obvious answer is yes, which is how I guess they got their positive responses.

All very disingenuous. Only later that they asked how close to Kensington High street I lived!"

If you do not want the Kensington High Street cycle lane replaced following the 17th March meeting (given how bad traffic and pollution from standstill traffic was last time, even in the November lockdown) then please write to the council, however briefly. Leadershipteam@rbkc.gov.uk and activetravel@rbkc.gov.uk