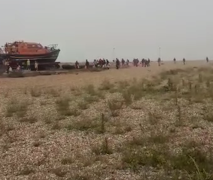 Down in Dungeness locals were astonished to see a stream of 'newcomers' exempt from any border controls sauntering past a nuclear power station and Derek Jarman's cottage. They seemed to have not a care in the world. INVASION

It doesn't matter that this was filmed by Farage.

What does matter is that this influx is happening on a daily basis as the people smugglers sneer at powerlessly pitiful Patel.

Ironically, the airport at Lydd is the base for a Portuguese company with a multi-million £ contract from Patel to operate drones over this stretch of the Channel: doesn't seem that they are having much success!

All one can say is that with 'Churchill' Johnson and Pitiful Patel in charge during the last war the Germans would have had no problems dropping in.

Maybe another dodgy friend of Johnson is getting a backhander.

The Dame once went to a moving citizen-making ceremony at the Town Hall.

A group of people from all over the world was there to be granted citizenship.

They had passed one test after another in order to obtain citizenship.

How angry they must feel that there is one rule for them and another for those who flaunt the rules.

Patel is possibly the worst Home Secretary in living memory but then what can one expect from some third rate ex-PR account executive.

When Sunak takes over his hit list should be...Jenrick, Shapps, Williamson and Patel....the four DUDS now Hancock has gone.